What is Trenbolone 200 by Dragon Pharma? 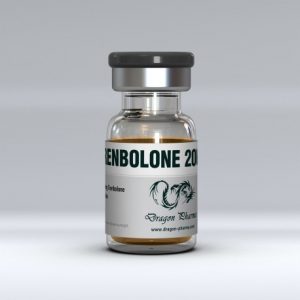 Trenbolone 200 is the brand name of the product manufactured by the very famous and trustworthy pharmaceutical company Dragon Pharma and this is a compound offering the long lived and very powerful steroid called Trenbolone with the Enanthate attached ester.

Trenbolone 200 with Tren Enanthate is considered to be a modern anabolic and androgenic steroid (AAS) agent that is used mainly and pretty much only in the sports fields by steroid users in different sports but especially sports like bodybuilding and powerlifting. Therefore this compound is used by athletes in many different sport disciplines when participants are looking for burning fat, gaining muscles and increasing power / strength levels, but is mainly used in powerlifting and bodybuilding.

This pharmaceutical company has appeared on the market not so long ago, but is already a very famous pharmacy that is highly trusted by both online retailers and customers searching for PEDs and steroids.

Trenbolone Enanthate is one of a total of 3 Trenbolone esterified versions. There is also Trenbolone Acetate being considered a shorter based steroid (and also the most famous Trenbolone version) and Trenbolone Hexahydrobenzylcarbonate or shortly Hexa often known as its brand name – Parabolan which is offering a much longer half life.

Trenbolone never got approved for medical or veterinary uses, however is highly used in scientific research meaning that there’s a big chance Trenbolone might appear on the market sooner or later. This is a very powerful steroid – one of the most powerful steroids that you would ever use.

The amount of time the compound is staying in the body is what makes a person decide what type of Trenbolone he actually needs.

Trenbolone Enanthate is used exclusively in sport disciplines as a steroid which is amazing for increasing physique and performance levels. That’s because as mentioned, Trenbolone Enanthate found in Trenbolone 200 never was approved for any medical uses for humans or in veterinary medicine.

Although not being the most famous Trenbolone compound for bodybuilders either, this steroid is still used by many people who are searching to increase their physique and performance levels with great success – that’s because the compound is offering effects that are fairly long.

The active period of this compound is approximately 10-15 days after the last dosage has been administered because the half life as said, is anywhere between 7-10 days. The compound is working by binding to the androgen receptor as any other steroids and is showing off huge anabolic and androgenic properties that are 500:500 compared to testosterone which is only 100:100, Trenbolone is considered a very powerful steroid.

It has no aromatization either and the compound is also working by increasing HGH and IGF 1 factor too. Here are some features of Trenbolone 200: increased level of insulin in the blood; anabolic environment; lowering cortisol levels; offers fat burning properties; more HGH levels; better nitrogen retention and protein synthesis; fast increase in strength levels and obviously huge increases in muscle mass that is lean and quality.

Trenbolone Enanthate, although can be used alone, is very rarely used solo. Most often, Trenbolone 200 is being administered with some other type of steroids depending on the ultimate goals.

That’s because Trenbolone Enanthate can be used in both cutting and bulking cycles, Trenbolone 200 can be stacked with both Stanozolol and Testosterone or Deca Durabolin. However, is very important to know that Trenbolone raises progestin levels so is recommended to avoid getting some other substances raising progestin levels.

So, depending on what exactly do you need it for, you would decide what other steroids to add. Also, cycle lengths also depends on ultimate goals but most often, Trenbolone Enanthate is used anywhere between 6 up to 12 weeks.

We would recommend to start slowly at only 200-350 mg a week as that would be enough to offer amazing results. Doses between 350 and 550 mg a week are used by more advanced users while doses between 550 and 700 mg per week by professionals. Never attempt to use more than 700 mg weekly.

Due to long half life – Trenbolone 200 can be used once or twice per week with great success.

Side effects can be controlled if using this compound properly. Lower doses is the first thing for controlling the side effects. This is a very powerful steroid which can offer side effects if getting abused and that’s nearly guaranteed.

Having a very high androgenic activity, androgen based side effects like virilizing side effects for women, aggression and temper, hair loss, acne etc. are very possible.

No aromatization offers no estrogenic based side effects, however, due to progestin levels gynecomastia is still possible in rare situations.

Dark colored urine, decreased endurance to cardio, night sweats, inability to reach climax and others are also possible with Trenbolone.

Remember this steroid is very powerful and it doesn’t require higher doses for being effective, but if abuse, side effects can be very nasty.

Dragon Pharma is offering very high quality Trenbolone and is offering this compound for sale. By getting Trenbolone 200 you are going to receive high quality and pure Trenbolone Enanthate that is going to offer huge results. You save money by getting a very powerful steroid which is an amazing deal for anyone looking to increase performance and physique.

Trenbolone is a very powerful steroid so it required lower doses for being very effective. Is an amazing cost effective compound that is going to save you money while getting you huge.